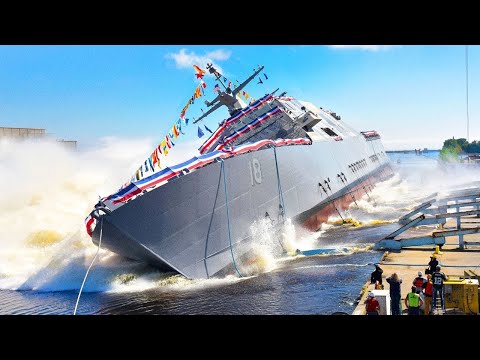 50M Videos is the #1 place for all your heart warming stories about amazing people that will inspire you everyday. Make sure to subscribe and never miss a single video!


The launching of ships is a prestigious event by itself as it shows successive efforts of the ship
designers, builders, and at their very best. However not all boat and ship launch ceremonies are
successes, and many times these events turn into unexpectedly massive ship launch failure. Even
though they cause losses of hundreds of thousands of dollars, these fails can be very funny too.
Let’s have a look at 10 ship launches that went horribly wrong
Number 10. Cargo Ship Launch Failure
Cargo ships are some of the most used and biggest ships In the world as they are responsible for
high levels of trade. Have you ever heard a ship spilling oil in the sea and destroying the habitat?
That’s always the doings of a cargo ship. These gigantic creatures are made to last forever
because they have to spend the whole time sailing the seas. If Whitebeard was alive today, he’d
have a cargo ship for his pirate crew. But some cargo ships don’t eventually last forever, and
some don’t even get to sail once because of a launching incident, just like the one we are about to
show you. As this vessel comes out of the yard, everything seems to be going just fine for it. But
then suddenly, in the presence of its proud creators and designers, the vessel starts to tilt to its
starboard side as smoothly as it took to the waters from the shipping yard. What can be the
reason for such ship launch failure? Any guess?
https://youtu.be/GLdXEwhsDiM
Number 9. Cruise Ship Launch Failure
Compared to cargo ships, cruise ships are more delicate and much higher, which makes them
more prone to damage. You must've heard the saying, “the higher they are, the bigger they fall”.

Or something like that…we are not experts In sayings…The makers of this Chinese vessel must
have been hugely embarrassed before the various gathered guests at the launching ceremony.
The vessel’s position is risky, submerged into the water at the back end. The people try to pull it
from the front to balance the weight so it doesn’t get completely submerged into water but the
surface gets loose and the ship directly goes inside water. We wonder how bad can the
management be for such a ship launching disaster.
https://youtu.be/ayKOlLhlQsc
Number 8. Equipment Failure
You would think that the management or bad luck must be at play for a bad ship launching
moment, but that isn't always the case. Not all boat or ship launches can be blamed on the ship’s
construction. Sometimes, it’s the equipment that aids in the vessel’s launch that fails completely.
Just as in this video. The equipment, which is the long crane, that is aiding the boat to be
launched into the waters collapses entirely resulting in the boat to capsize in the water. The crane
can be seen going up in the air and losing its balance as the ship falls down, caressing the dock
really bad. Maybe the management should have spent a little more money on a better crane
company. At least the crane didn’t fall in the water, that is a plus.
Number 7. Harness Failure
In this video, a small boat launching disaster is shown. This boat seems to be quite well-
harnessed as it is prepared to be launched. Here, everything is supposed to play out well. The
boat stays in the air a while as the operator positions it nicely for the launch. Unfortunately, But

the boat suddenly slips out the harness’s confines, falling into the water. It was probably due to
some wire failure but the failed boat launch does catch everyone by surprise.
Number 6. RMS Titanic
Titanic is the ship disaster that everyone knows about. At the time of its launch, the Titanic was
the largest and most developed cruise ship in the world, having been built in Ireland. Engineers
were so confident of the ship that they literally called it unsinkable. Kinda ironic because it sank
during its very first voyage. On April 10th, 1912, the Titanic set sail from Southampton on its
way to New York City. Tragedy struck on April 14th, 1912, when the Titanic hit an iceberg
while sailing in the North Atlantic Ocean. It is estimated that 1517 people lost their lives that
every day, making it one of the most devastating maritime disasters in modern history. After
many unsuccessful expeditions and attempts to discover the Titanic wreckage, its location was
finally discovered in 1985. Numerous artifacts and antiques were collected from the shipwreck,
and most of them are now held at a display in the National Maritime Museum in England.
Today, the wreckage of the RMS Titanic is under the protection of the 2001UNESCO
Convention. There have been numerous schemes put in place to raise the ship from its wreckage
area, but the ship is in such a fragile condition that such plans have been abandoned altogether.


more from the author

Odyssey Of the Seas, Virtual Balcony

Our top 10 live aboard bathroom

Our WORST CRUISE EVER!

30 Biggest Ship Fails Ever Caught On